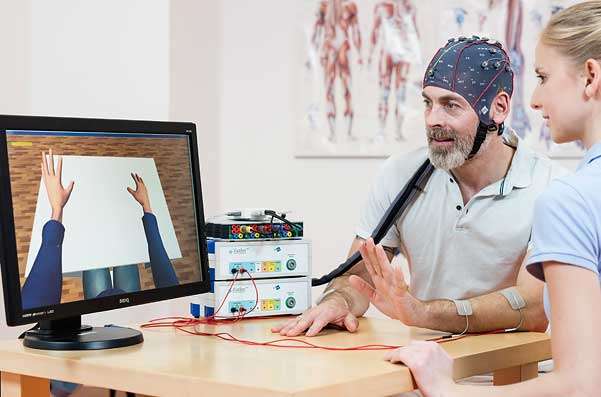 recoveriX is an innovative and unique Brain-Computer Interface (BCI) System, which was developed especially for the rehabilitation of stroke patients. It should help the patient regain the function of the upper and lower extremities, in addition to standard therapy. It can be used in the acute, sub-acute, or chronic state.

What is a Brain-Computer Interface (BCI) System?

A BCI is a device that can allow communication or device control without movement. Instead, a BCI bypasses the brain’s normal output pathways of peripheral nerves and muscles, and detects mental activity through direct measures of brain activity (Usually the EEG (Electroencephalogram)).

Mrs. Savin suddenly suffered a stroke. It came without warning, and left her right arm completely paralyzed. After participating in recoveriX-therapy, she was soon able to move her right arm again.

This video show a typical session with the recoveriX Brain-Computer Interface (BCI) System:

recoveriX uses state-of-the-art neurotechnology that leads to success even in the case of chronic disorders.

This is what exactly we can use for our therapy!

A combination of 3 feedback-systems improve your chances for successful therapy:

The simulation on the screen makes your movement imagination visible. You sit in front of a screen, where you can see the hands or feet of an “avatar” (virtual person). This should give you the feeling of watching your own movements in front of a mirror. If the system identifies a correct imagination of the movement (such as a right hand movement), the avatar moves the right hand. So you can control the avatar’s movements with your mind, which should help you relearn to control your own movements.

The imagined movement leads to electrical stimulation of the affected muscles – without pain! For this stimulation, two electrodes are placed (for example) on the dorsiflexors of the wrist. If the system recognizes a correct motor imagery, the muscles get electrically stimulated, causing a real movement. This should help you re-learn how to initiate movement, and thus make movement possible again.

Do not hesitate to contact us about this new tool use at the Montreal Neurotherapy Center and see how we can help you regain a good quality of life!

Montreal Neurotherapy was so impressed with the results of this new technology that we became an official distributor of the After Stroke Rehabilitation System recoveriX. Do not hesitate to contact us for information.