What is Quantitative Electroencephalogram (qEEG)?

A QEEG is an assessment tool to evaluate a person’s brainwaves and determine to what extent the brainwave patterns differ from normal.

Recent research shows that certain dysfunctions, such as ADHD, Schizophrenia, OCD, Depression, Specific Learning Disabilities, and others are associated with specific patterns in spontaneous and evoked electrical potentials, recorded from the head by multiple surface electrodes, and that these spontaneous potentials and especially the evoked electric potentials provide reliable brain markers of the brain function and dysfunction. 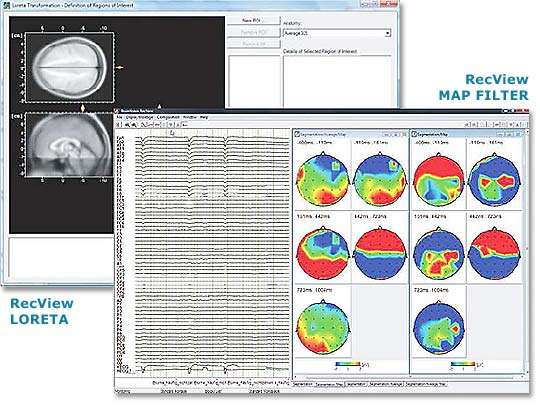 Measured data of spontaneous and evoked electrical potentials can be compared with data from a normative database, thus helping the clinicians confirm the diagnosis and establish a personalized treatment plan. 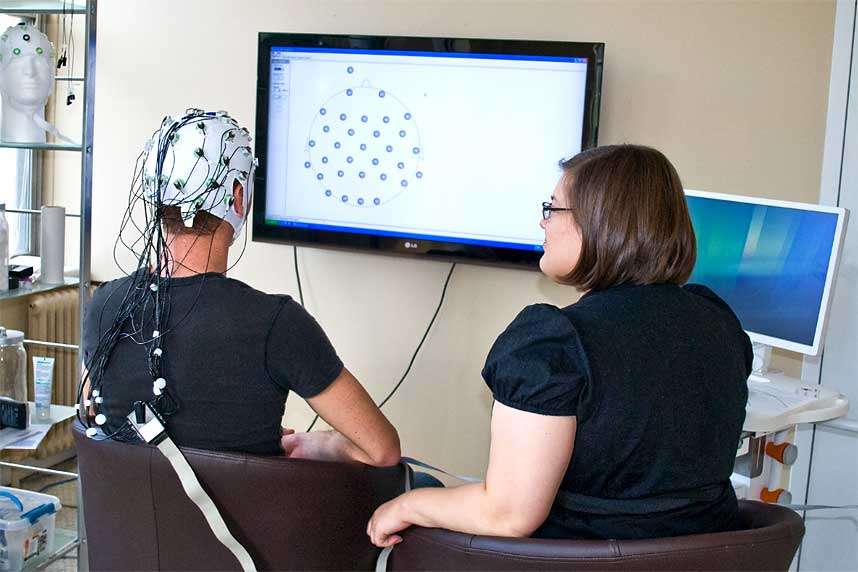 To perform a QEEG mapping procedure, electrodes, also known as sensors, are typically positioned on the client’s scalp at 32 standardized locations designated by the International 10-20 System (see below). This is usually accomplished by placing a special tight lycra cap, much like a bathing cap, on the client’s head. This cap has all the electrodes already attached in their proper position and is then connected to a differential amplifier and computer with a special cable. The electrodes in the cap make contact with the skin of the scalp by means of a special gel that reduces the resistance between the electrode and the skin. The electrodes pickup the very faint electrical signals of the brain that pass through the skull and scalp and pass these on to a differential amplifier that may amplify the signal a million times or more and convert the analog signal to a digital signal before passing it on to the computer.

Understanding the numbers and graphics 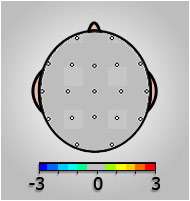 The numbers generated are Z scores which is a metric which represents how normal or abnormal a score is in comparison to the Neuroguide Database.

The heads use colors to represent the Z scores (Brain Activity) at 19 brain regions, with the nose on the top. In the color scale, grey represents scores that are normal (+/- 1 Z score). The dots on the head are electrode sites (e.g. the top two being prefrontal sites) 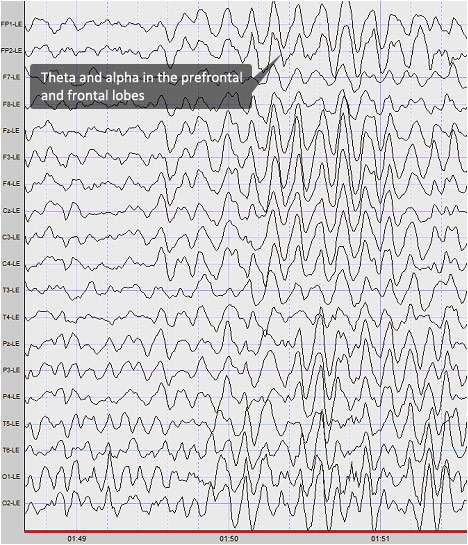 Here is an example of three seconds of EEG recorded at 19 sites which shows the brain making normal brainwaves to start but then shifts into a dysregulated state where it makes the larger, slower brainwaves (theta). This dysregulated state is likely occurring when this ADHD child is inattentive.

Same ADHD child’s EEG represented graphically. We can see his excessive theta activity in the graph below:

An adult suffering with severe Obsessive Compulsive Disorder has a QEEG which shows very excessive fast wave activity, a common pattern in OCD:

An adolescent with a severe seizure disorder (5x/week) had this QEEG before and after treatment: 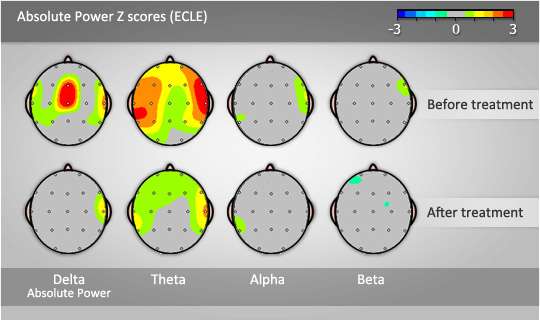 After a course of Neurofeedback, you can see he had a much improved QEEG (and only one seizure in 3 months).
— Notice the significant reduction of Delta and Theta activity.

Brainmaps provide a great deal of additional information in a variety of tables and graphs. In addition to measures of the power of the EEG at various speeds, the Connectivity measures give information about but about how well one part of the brain is communicating with another part of the brain. This adolescent with ADHD and Obsessive Compulsive Disorder has difficulties with effective communication between various prefrontal and frontal lobe sites.

Connectivity: A measure of how the various parts of the brain communicate with each other

The QEEG human brain mapping procedure is very relevant because it provides more information than the typical electroencephalogram (EEG). By having a QEEG done, the brain activity can be compared to a wide database of other “normal brains,” helping to determine which, if any, of the brain functions is actually abnormal. QEEG can be helpful in determining whether a person’s symptoms are associated with specific brain dysfunctions .This valuable information can guide treatment planning . Repeated QEEG assessments can also be used to monitor treatment progress by showing changes in brain functioning as treatment progresses and symptoms change.