A Little Chaos With Your Coffee?

Caffeine produces a beneficial disorder in the human brain.

Any serious coffee drinker can offer abundant anecdotal proof of the power of caffeine to boost our information processing abilities.  Who hasn’t at one time or another been hopelessly stalled in the middle of some important project, only to reach for the nearest cup of coffee (or tea, or caffeinated soda), and ride the caffeine wave all the way to the project’s successful completion?  And the evidence for this brain-boosting benefit of caffeine is not merely anecdotal. Numerous scientific studies have demonstrated the power of caffeine to sharpen our mental focus.

A recent study in China offers an interesting glimpse into the neural mechanics behind this benefit by finding a connection between caffeine use and the amount of entropy, or disorder, in the brain, and the connection does not point in the direction you might think.

When we consider the cognitive function of our brains, we typically think of order as a virtue, and disorder as a vice.  “An orderly mind is a healthy mind,” we might say.  In the world of physics (the second law of thermodynamics, to be specific) entropy is a measure of the disorder of any closed system—the higher the entropy, the greater the disorder.  To take a familiar example, an unshuffled deck of playing cards straight out of the box is a very orderly system, with all suits grouped together and all numbers ascending sequentially one suit at a time.  If you split the deck at the three of hearts, you know before looking that the next card in the deck is going to be a four of hearts.  Shuffle the deck, however, and that same three of hearts can be followed by any other card in the deck.  The probability of seeing a four of hearts there is exactly the same as seeing the four of clubs, or the king of diamonds, or the ace of spades. Shuffling the deck has introduced disorder, or entropy, into the system.

Chang et al. investigated the correlation of caffeine intake with overall brain entropy levels by conducting fMRI scans of sixty volunteers before and after they ingested a 200 mg caffeine pill, and then measuring changes in functional connectivity between the two scans.  Given the demonstrated power of caffeine to help us focus our attention, it seems only logical that the scans would register an overall decrease in the brain’s entropy—an increase in its orderliness–in the second scan, but actually the opposite was true.  The caffeinated brains showed a higher level of entropy, particularly in the prefrontal cortex, the lateral striatum, the visual cortex, and the motor areas—regions of the brain most heavily involved in “attention, vigilance, and action/motor function.” 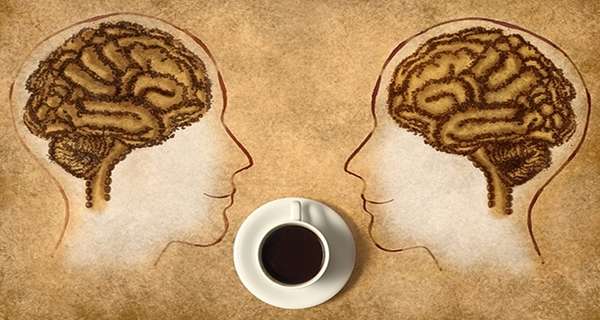 The finding that caffeine increases entropy in the areas of our brain responsible for attention and vigilance might seem to contradict our subjective perception—supported by solid research—that caffeine increases our powers of concentration, but when we consider the types of cognitive tasks regularly demanded of our brains, the result is not surprising at all.  The world we navigate on a day-to-day basis is far more like a shuffled deck of cards than it is a deck fresh out of the box, full of unpredictable twists and turns that quite often require our brains to sort through multiple alternative courses of action simultaneously before settling upon the one that offers the highest probability of achieving our desired outcome.  A low brain entropy, with a more predictable range of connectivity patterns, is less equipped to deal with the complex, often improbable information processing demands with which our world routinely confronts us than is a brain characterized by more varied and less predictable connectivity patterns.  Higher entropy levels equate to greater complexity, and while it is true that too much entropy can be problematic (being associated with schizophrenia, for example), up to a certain point, the complexity of a higher entropy brain makes it better able to interact with the complex world in which we live than is a more orderly, low entropy brain.  Several recent studies, in fact, have found a positive correlation between brain entropy and human intelligence in general, so a particularly enthusiastic coffee drinker might almost make the case that caffeine makes you smarter.

While it is true that such an extreme claim is perhaps unwarranted at this point, research has shown that brain entropy is associated with the type of cognitive complexity that typically characterizes human intelligence, and this most recent study suggests that caffeine is a means of increasing that complexity.  All of this research considered together should, at the very least, give us a boost of confidence as we reach for a cup of coffee to help us through that next big project we’re facing.